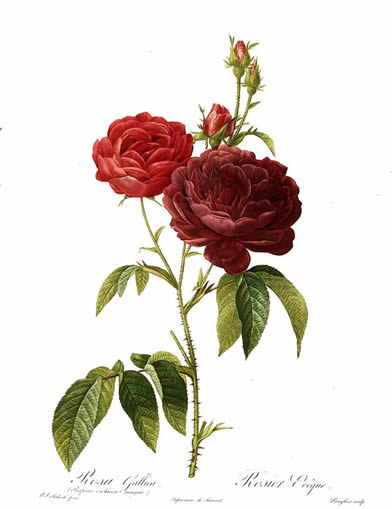 A rose is a woody perennial flowering plant of the genus Rosa, in the family Rosaceae, or the flower it bears. There are over three hundred species and thousands of cultivars. They form a group of plants that can be erect shrubs, climbing, or trailing, with stems that are often armed with sharp prickles. Flowers vary in size and shape and are usually large and showy, in colours ranging from white through yellows and reds. Most species are native to Asia, with smaller numbers native to Europe, North America, and northwestern Africa. Species, cultivars and hybrids are all widely grown for their beauty and often are fragrant. Roses have acquired cultural significance in many societies. Rose plants range in size from compact, miniature roses, to climbers that can reach seven meters in height. Different species hybridize easily, and this has been used in the development of the wide range of garden roses.

The name rose comes from French, itself from Latin rosa, which was perhaps borrowed from Oscan, from Greek rhódon (Aeolic wródon), itself borrowed from Old Persian wrd- (wurdi), related to Avestan var, Sogdian ward, Parthian wâr.

The long cultural history of the rose has led to it being used often as a symbol. In ancient Greece, the rose was closely associated with the goddess Aphrodite. In the Iliad, Aphrodite protects the body of Hector using the 'immortal oil of the rose' and the archaic Greek lyric poet Ibycus praises a beautiful youth saying that Aphrodite nursed him 'among rose blossoms'. The second-century AD Greek travel writer Pausanias associates the rose with the story of Adonis and states that the rose is red because Aphrodite wounded herself on one of its thorns and stained the flower red with her blood. Book Eleven of the ancient Roman novel The Golden Ass by Apuleius contains a scene in which the goddess Isis, who is identified with Venus, instructs the main character, Lucius, who has been transformed into a donkey, to eat rose petals from a crown of roses worn by a priest as part of a religious procession in order to regain his humanity

Following the Christianization of the Roman Empire, the rose became identified with the Virgin Mary. The color of the rose and the number of roses received has symbolic representation. The rose symbol eventually led to the creation of the rosary and other devotional prayers in Christianity.

Framed print after 1908 painting by Henry Payne of the scene in the Temple Garden, where supporters of the rival factions in the Wars of the Roses pick either red or white roses

Ever since the 1400s, the Franciscans have had a Crown Rosary of the Seven Joys of the Blessed Virgin Mary. In the 1400s and 1500s, the Carthusians promoted the idea of sacred mysteries associated with the rose symbol and rose gardens. Albrecht Dürer's painting The Feast of the Rosary (1506) depicts the Virgin Mary distributing garlands of roses to her worshippers.

Roses symbolised the Houses of York and Lancaster in a conflict known as the Wars of the Roses.

Roses are a favored subject in art and appear in portraits, illustrations, on stamps, as ornaments or as architectural elements. The Luxembourg-born Belgian artist and botanist Pierre-Joseph Redouté is known for his detailed watercolours of flowers, particularly roses.

Henri Fantin-Latour was also a prolific painter of still life, particularly flowers including roses. The rose 'Fantin-Latour' was named after the artist.

Other impressionists including Claude Monet, Paul Cézanne and Pierre-Auguste Renoir have paintings of roses among their works.

A spade is a tool primarily for digging, comprising a blade – typically stunted and less curved than that of a shovel – and a long handle. Early spades were made of riven wood or of animal bones (often shoulder blades). After the art of metalworking was developed, spades were made with sharper tips of metal. Before the introduction of metal spades manual labor was less efficient at moving earth, with picks being required to break up the soil in addition to a spade for moving the dirt. With a metal tip, a spade can both break and move the earth in most situations, increasing efficiency.

English spade is from Old English spadu, spædu (f.) or spada (m.). The same word is found in Old Frisian spade and Old Saxon spado. High German spatenonly appears in Early Modern German, probably loaned from Low German. In Denmark, Sweden and Norway the word is spade as well. Other Scandinavian forms are in turn loaned from German. The term may thus not originate in Common Germanic and appears to be a North Sea Germanic innovation or loaned. Closely related is Greek, whence Latin spatha.

Spades are made in many shapes and sizes, for a variety of different functions and jobs, and there are many different designs used in spade manufacturing. People often mistakenly use the term shovel interchangeably with spade—but, strictly speaking, shovels generally are broad-bottomed tools for moving loose materials, whereas spades tend to have a flat bottom edge for digging.

The most common spade is a garden spade, which typically has a long handle, is wide, and is treaded (has rests for the feet to drive the spade into the ground). An Irish spade is similar to a common garden spade, with the same general design, although it has a much thinner head. A sharpshooter is a narrow spade. A turfing iron has a short, round head, and is used for cutting and paring off turf. A digging fork, or grape, is forked much like a pitchfork, and is useful for loosening ground and gardening. There can also be toy spades for children.

Loy ploughing was a form of manual ploughing carried out in Ireland using a form of spade called a loy. It took place on very small farms or on very hilly ground, where horses couldn't work or where farmers couldn't afford them. It was used up until the 1960s on poorer land. This suited the moist climate of Ireland as the trenches formed by turning in the sods providing drainage. It also allowed the growing of potatoes on mountain slopes where no other cultivation could take place.

Asparagus has been used as a vegetable owing to its distinct flavor, and in medicine due to its diuretic properties and its purported function as an aphrodisiac. It is pictured as an offering on an Egyptian frieze dating to 3000 BC. In ancient times, it was also known in Syria and in Spain. Greeks and Romans ate it fresh when in season, and dried the vegetable for use in winter. Roman Epicureans froze its sprouts high in the Alps for the Feast of Epicurus. Emperor Augustus created the 'Asparagus Fleet' for hauling the vegetable, and coined the expression 'faster than cooking asparagus' for quick action.

A recipe for cooking asparagus is given in one of the oldest surviving collection of recipes (Apicius's third-century BC De re coquinaria, Book III'). In the second century BC, the Greek physician Galen, highly respected within Roman society, mentioned asparagus as a beneficial herb, but as dominance of the Roman empire waned, asparagus' medicinal value drew little attention until al-Nafzawi's The Perfumed Garden. That piece of writing celebrates its pruported aphrodisiacal power that the Indian Ananga Ranga attributes to 'special phosphorus elements' that also counteract fatigue.

By 1469, asparagus was cultivated in French monasteries. Asparagus appears to have been little noticed in England until 1538, and in Germany until 1542.

The finest texture and the most palatable yet least bitter taste is found in the plants' young tips, but by the time the plant has begun to branch and assume its mature form, it has become too bitter to be considered palatable. The points d'amour ('love tips') were served as a delicacy to Madame de Pompadour.

Asparagus became available to the New World around 1850, in the United States.